A few days ago on my birthday, I reached one of those seismic “a-ha” moments that is large enough to still leave you repositioning yourself for several days after.

In a hard moment where God asked me what I want most of all, I became aware that the direction God is taking me in now is more wildly different than previous seasons than I realized. While learning for me is a pleasure and a joy, God is more interested in this season in building up my heart than my mind. While I always knew that God wanted me to focus on connection during this trip, I didn’t realize that he’s currently more concerned with answering my unvoiced prayers than ones I had explicitly requested. Sometimes the breakthrough we need isn’t the breakthrough we asked for, and hallelujah Jesus that he knows us better than we know ourselves.

Partially for my own sake and partially because I believe it’s so true to how God moves, I’m taking a little time to reflect on what I know and what I don’t at the halfway point of this season.

I say halfway point, because my current travel journey started just a few days before last Christmas. I say halfway point because there are several clear time time frames the Lord has given me for this coming Fall and Winter 2022. 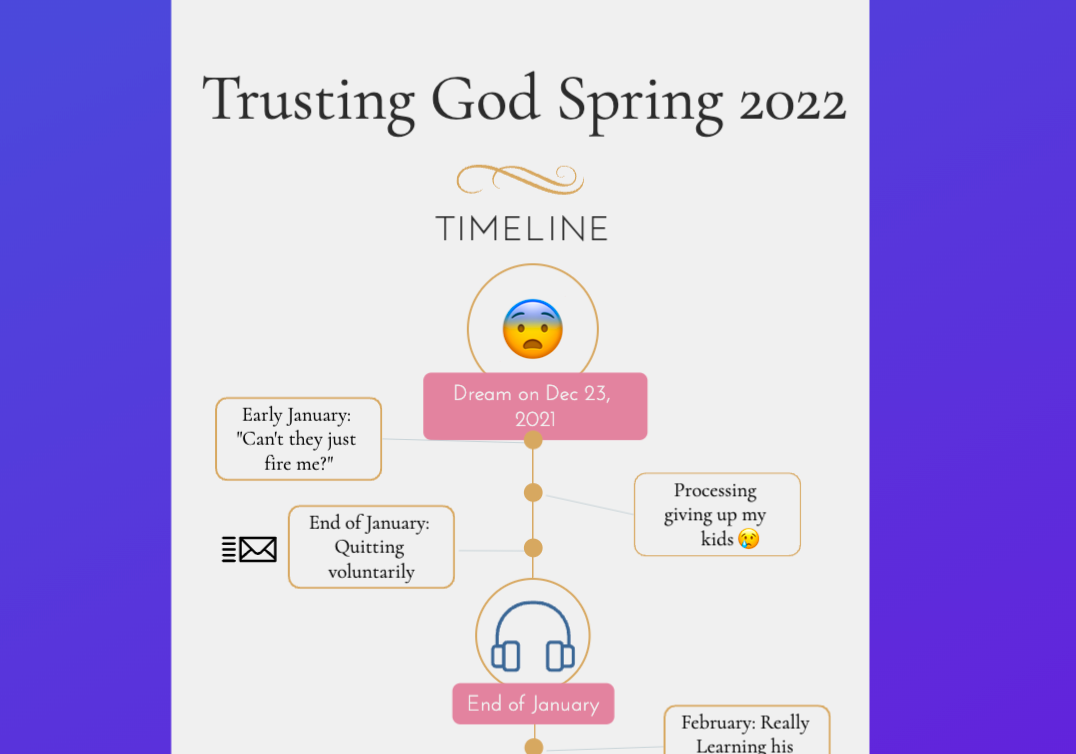 As I obeyed God to leave my job, listened carefully for direction and learning, gave all my stuff away, God gradually built me up to the point where I knew his voice well enough to discern whether an unction to visit a place was from him. Through tracking my dreams and simply trusting him in obedience, he is connecting me with the right people and ministries.

Right now, I would say that about 40% of my daily logistics are fixed, while about 60% are flexible. Usually when I start discerning a new place, I have months worth of patterns in my dreams about that area that I’ve already organized by theme, to explore further. So far, the Lord has pulled my attention to regions based on its need, based on emerging leaders there he wants to elevate, based on emerging ministries that have his favor, and based on long term callings he wants to solidify in me. I’ve gotten better at recognizing that unction over time, and navigating how God is speaking.

As I do things like buy plane tickets and reach out to friends to see if they know people, details begin to fall in place. I prioritize establishing a rapport with individuals or groups first, then deal with logistics like accommodation or flights. And similarly, since God made the goal of this trip as connection, my events are flexible and mostly focused on getting to know people.

Once I start to book plane tickets and accommodation, God sends me more people, which multiples (since people know people). For example, after I decided to visit Singapore, a friend I had known years back on a prayer team in a former church reached out, said she’d love to connect, and is helping connect me to people in her current church who can give me an idea of what God is presently doing in the city. I expect there will be a domino effect from here.

In early April, God really challenged me to learn trust him more fluently, so there were lots of moments where I only could plan one day at a time. As I was in need of clarity, God would add or eliminate possibilities so that it was obvious what doors to take. Over the past month, God has been trusting me with more information for longer periods of time, and my capacity to connect with new people has seemed to accelerate. Unlike the days where I could just plan one day at a time, today I have clarity on where I should be until at least halfway through July.

There is still plenty of time for God to move between mid-July and this Fall and Winter. While I don’t have the logistics yet, I know his plans will be good. For now, thematically, spatially, and chronologically, there are several reasons why I think I may be nearing the halfway point in my trip.

Thematically: Getting Outside the West

As I prepare to travel to Singapore in a few days, I’d be lying to say I haven’t been longing for this moment. I am so grateful for the work God did in Glasgow, London, and Munich, but my sincere desire has been to experientially make sense of a pull to the Southern Hemisphere. In my dreams, the Lord has been speaking about partnerships between the Southern Hemisphere and Western nations he wants to create through imagery of infants of mixed ethnicities.

I’ve had various similar dreams about strange new fruit that the Lord wants to produce through these partnerships, that visually looks different than anything else that currently grows on the Earth. And I’ve had various dreams of God mixing together ingredients from various parts of the world (for example, like European strawberries, Chinese dried black mushrooms, Thai chillies, Mediterranean figs, and more). I’ve had visions where Jesus personifies himself as an Asian or Latin American. I feel very fortunate to go directly from Singapore to Brazil, as for months I’ve been having dreams where I start in Latin America and by the end of the dream am in Asia (or vice versa). Similarly, I am often sharing things from Asian grocery stores with Western nations in my dreams. However he does it, I know that the Lord has plans for these nations to build apostolically together.

Along with several notable prophets, I believe that at this time, God is moving his favor outside of the West and to the Southern Hemisphere. Because of the way God is moving at this time in history, if I am going to be explicitly honest, I am wondering if the financial breakthrough I’ve needed will come when I am spatially outside of the Western world. If there was a time to build in alignment with ministries outside of a Western worldview, that time is now.

As I physically cross over into Asia and then to Latin America, there is this a sense of passing through a barrier that I have been waiting to cross. To me, this feels like a symbolic halfway point that time in the UK and Germany has been building towards.

One week ago, I had a dream where I was watching myself traveling on a map. Seeing visuals like maps, infographics, and videos is relatively common in my dreams, so I wasn’t surprised that it looked like Google maps. From the beginning until the end of the journey, I ultimately moved in a square. The place I returned to was ultimately very close to the place I started, but it wasn’t clear if I would stay there or continue on elsewhere.

Ironically, the place I am going to seminary will be just a 45 minute drive from my original DC address. I will be there for 3 weeks, then the unknown.

I find that imagining time zones is easiest when you think of it like a number line. When you find the difference between two numbers on a number line, all you have to do is count the hops.

According to this map, there are exactly 12 hops between Washington DC’s time zone (EST) to Singapore’s time zone (CEST). That means that give or take, they are nearly on the opposite side of the world from each other.

I’m actually quite curious about what God will do when I’m spatially as far away from home as possible. I have already been coordinating with friends in North America about how we will communicate, and to be quite honest, the communication prospects will either be very intentional or limited. Since I’ll just be in Singapore a few weeks, I actually think that it’s likely God will do some important building in me when I have more distance from other people.

Another reason I feel that I’m reaching a halfway point is that after I attend seminary in Alexandria, there will be about half a year remaining until the timelines God has given me for this Fall and Winter.

If this has been my progression so far…

Just imagine what would happen if you took all the months and folded them in half vertically?

We all know that the halfway point in a Western calendar year is between June and July. If I stack these two halves on top of one another, I have nearly two equal portions: one clear, the other unknown.

While I am certainly learning and enjoying this part of my journey, lately it has felt like a furnace. When you pass through a tunnel, the middle part is often the least visible. The good thing about a tunnel is that you don’t have to focus on the entrance or the exit, only where you are currently at. We have to learn to trust that at some point, things will become clear again. As we trust, we simply keep going and gradually learn to relax.

I am believing that God’s plans are good, even when we don’t know them. Instead of asking God for more logistics, I am actually asking for him to leave me in the furnace a bit longer and let it spread to the rest of my life. I’m not holding back and I’m not asking for it to stop. Again, I’d rather that God look me in the eyes and know that I’m serious rather than for him to make me more comfortable. I don’t want to be overzealous like Peter when Jesus washed his feet, but out of trust, I don’t want to hold anything back. It’s not just fear of the Lord, it’s knowing God as trustworthy.

What comes out of a furnace is beautiful. God has been especially bold already this year in sharing some of his plans for my life that he means to establish. Because of the size of some of the things he’s talking about, my reaction at this point is mostly peace and a “Well, up to you to make that happen.”

Spatially when it comes to travel, the safest place in the world is in the will of God. If I’m being honest, sometimes I think God is like a parent with a squalling toddler, “Just get in the car and I’ll tell you where we’re going on the way.” It’s not just that we wouldn’t always be ready to know, its that it’s a waste of time to explain.

In another 6 months, I’ll do another one of these reflections and share how close my predictions came to real life as well as some next steps (if I know them by then, lol). In the meantime, Lord, steer.

Hello! Formerly of Kansas, and Washington, DC, I am an emerging voice in Holy Spirit-led youth ministry. This site contains emergent apostolic strategy, prophetic words, and tutorials for the interdenominational, international, and charismatic Church and Educational Sector. Check out more on my journey with 5-fold ministry, doctoral study, and travel through my Monthly Summaries. I take Jesus's invitation to welcome children in his name (Luke 9:48) and Jesus's exhortation to become like children literally (Mathew 18:3). In order to shape the world well for adults, we must serve the youngest among us so that we will truly understand who we are as sons and daughters (2 Corinthians 6:18).] View more posts